I have been helping with Ultra 4 racing for many years now, whether working recovery, chasing for NORRA races or assists with race teams, and chose to begin racing myself in 2017. I purchased the car I had been pitting for in late November ‘17 as a roller. We proceeded to race that car until its limits had been met and made the decision to step up to a 4800 class car with no compromises. We began the build in March of 2020 and made it to King of the Hammers 2021. During that time the car was featured in Ultra4 garage series due to its custom components. The biggest being the only twin turbo’d powerplant and custom built long shocks due to class restrictions. We are now sitting in 5th place with the 4869 for Western Points in Ultra 4. In our most recent short course race, we turned the fastest laps in class all day while fighting through traffic. Our plans are to race the Ultra 4 West Series, Norcal Rock Racing series, and if time allows a couple VORRA desert races as well. I started using Stage 8 when there was a need for securing the header bolts and now have installed their kit on my Ford 9” ring gear. 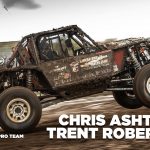 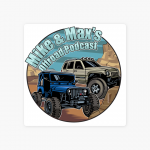